We woke up to glorious sunshine, way up in the mountain, around 1700 metres up. With Willow’s parents in need of gas, they left early to drive forty minutes up to Lourdes in a hopeful quest for more. We were parked right next to a roadside bistro, so I didn’t even need to get on my bike to fetch breakfast. Whilst I was there, the morning rush hour went past.

I received a call from Antony informing me that their quest for gas was not going well and that they were buying a small camping stove to see them through until Wednesday. He informed me that they would be back by lunch time.

With time to spare, Willow decided she was going to heat up some water and use our portable shower head to freshen up. After twenty minutes of heating her water, she was ready to clean… Until I knocked the collapsible bucket, I tipped almost the entire contents into the van. I can assure you the vocabulary she used to describe me is not child friendly, but if you know Willow well, then I am sure you can fill in the blanks.

So she set to work, reheating more water to have another attempt at it. Again, after around twenty minutes it was ready for her to try again. As fortune would have it, this time she knocked the bucket and spilt almost as much as I did in the van. The quote people in glass houses did spring to mind. Feeling slightly smug at this point, she did however have enough water to have an indoor shower, which worked very well. After the experience, I think we will be both hoping for warm weather in America, just to avoid this ever happening again. Apparently the local rush hour felt our pain and came to visit us in the van. 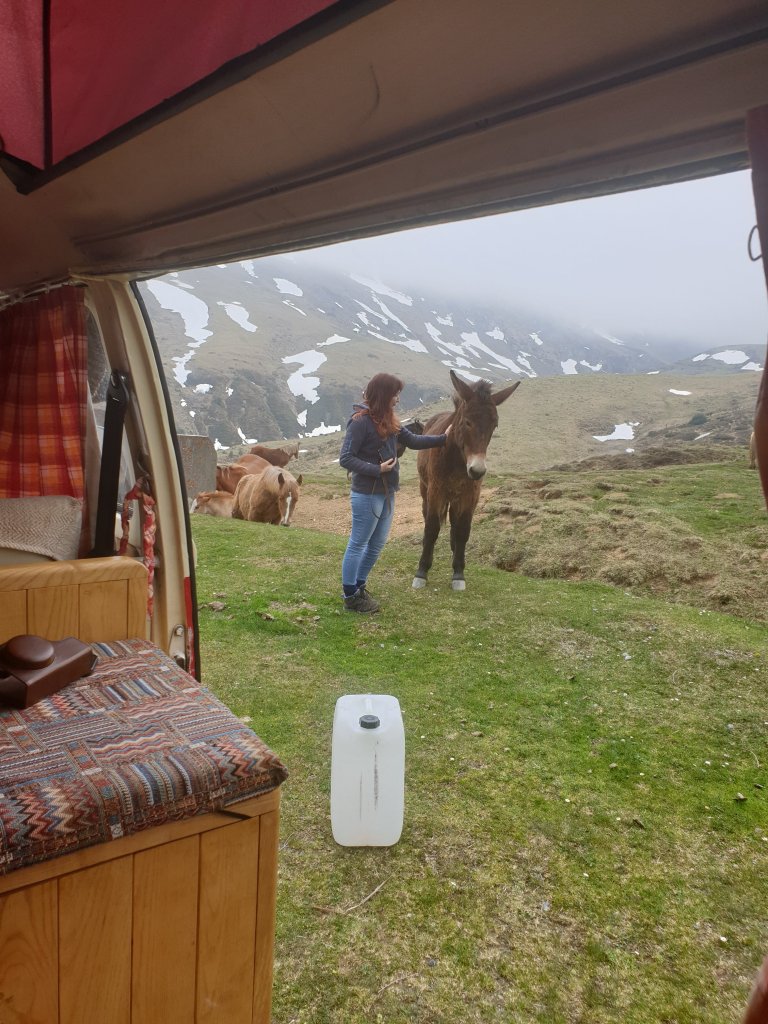 After the very poor attempt at showering, we decided to take advantage of the free time and signal to update our blogs. This results in a manic rush to type everything that we can remember, before the signal god decides that we now have to move our phone 3cm to the side in order to continue receiving signal. By midday, our blogs were up to date and Willow’s parents had returned. Unfortunately, they had seemed to bring in clouds and it very quickly got very cold and dark. Not what you want when you are reading about a glorious heatwave back home. Nevertheless, we decided to make the most of it and do a small walk through a Nordic ski route. 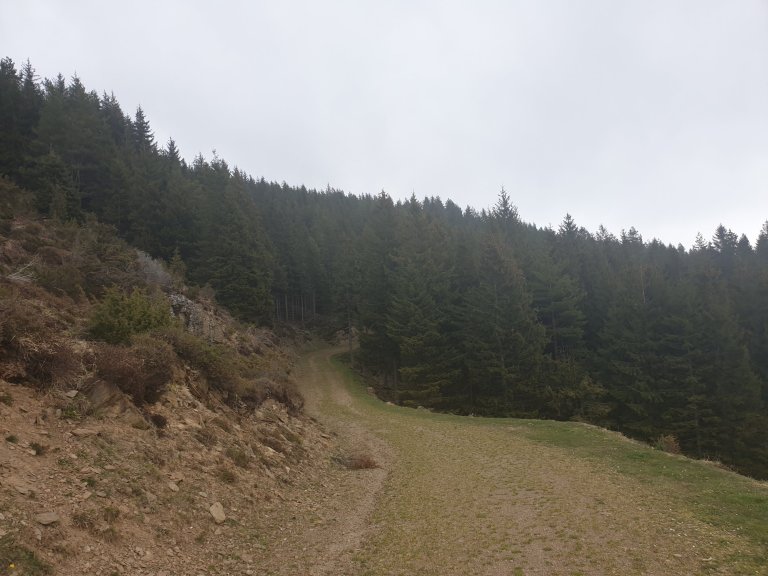 Along the way, I found a very fetching scarf on the floor. 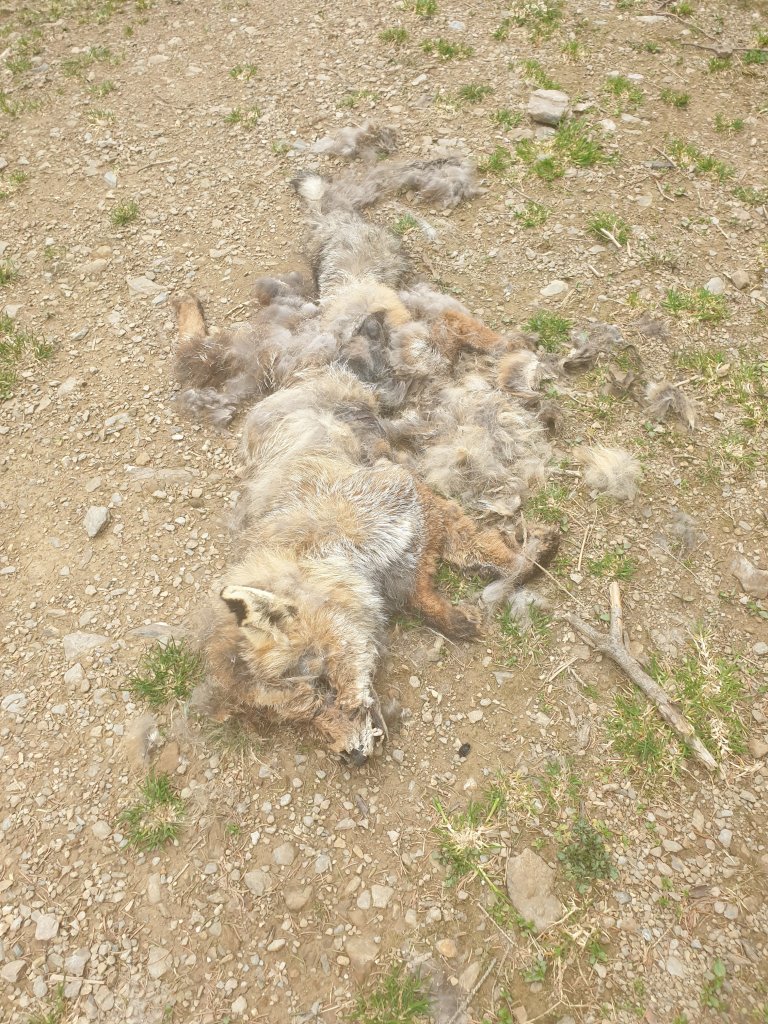 The walk made me realise that I have only ever skied once before. At the Akers. It did have snow on at the time, but I quickly realised that it was missing certain appeals.

The circular walk was not very long, and we were back at the vans after around forty minutes. The locals still seemed fascinated by Ruby. 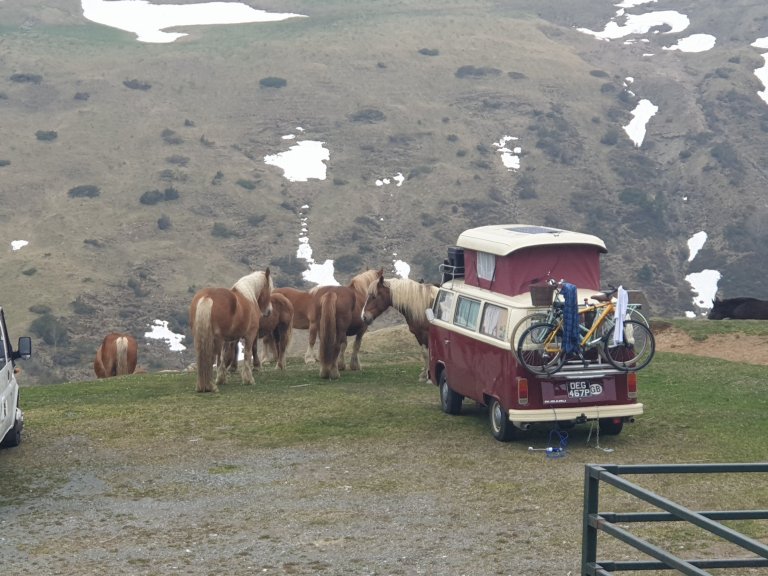 We had a quick cheese lunch and then packed up and set off east, heading towards a walk Willow had found which involved a lake and a supposedly lovely waterfall.

It was a short drive down our mountain and through another valley. We parked up just on the side of the only main road to where we would be walking, but the spot was fairly sheltered from wind and I had my trusty ear plugs to help through the night.

With Willow’s parents out of gas, it was up to Ruby to prepare the evening’s meal, which would be a Mediterranean vegetable tray bake, with goats cheese and cooked chicory in a blue cheese sauce. Our generator had run out the night before and so Willow’s parents had kindly refilled it for us on their search for gas. However, the generator had started stuttering and kept dying. After a lot of head scratching, it tool Antony to tell us that he had closed the vent for the petrol. Problem solved. After that, Ruby happily cooked the evening meal with we enjoyed with what was becoming a fan favourite wine.

Finally fed, Willow and I went back to Ruby to treat ourselves to a few episodes of Black Books. My laptop was fairly low, so we turned the inverter on to power it. We were slightly concerned that our battery metre was telling us that our batteries were very close to 50% usage, which isn’t good. Within five minutes that batteries hit the minimum for our newly installed battery protector to kick in. Killing all of our electric in the van. This was not good. The same thing happened to us last summer, and so we were quickly coming to the conclusion that our current set up would not be enough to support us on our travels in America. Our problems were that our alternator was not designed to charge a starter motor and leisure batteries. Also, we had installed a battery charge which came with the solar panel kit, and it also was not built to support our heavy duty electrical set up. With no power, we went to bed convinced that we will have to up grade our battery charger very quickly, if we ever hope of living in Ruby for a year with electric.

At least I had my ear plugs for the noisy road!