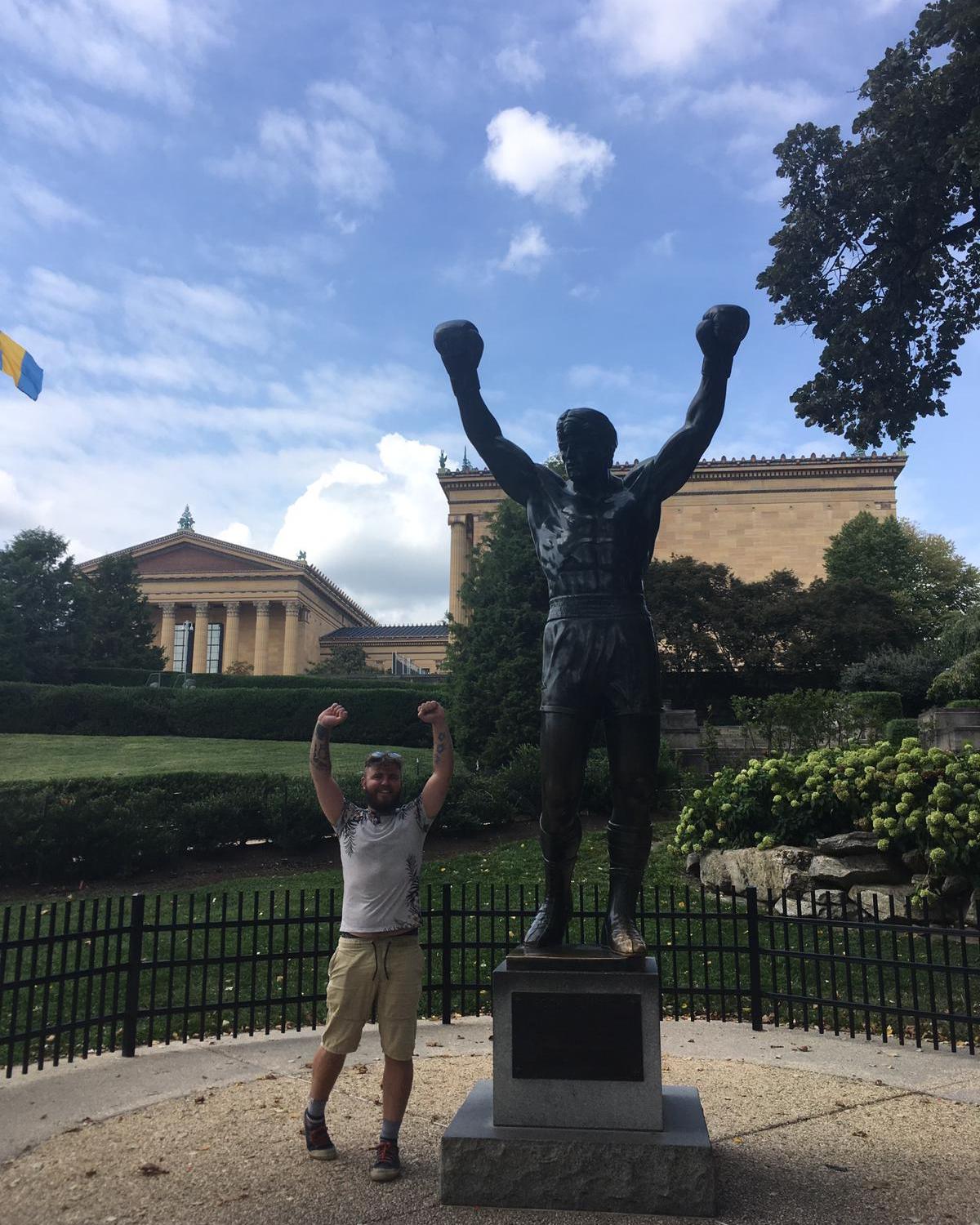 So after four years of planning and dreaming, I don’t think either of us envisioned us camped in the back of an SUV for four nights. As you can imagine, the relief to actually get a good night’s sleep in the van was overwhelming.

Sleep is obviously really important, but can often be very tricky to negotiate when you’re wild camping. Most of the time we have slept in Ruby, the tranquil lake spot at the bottom of a dead end road, turns out to be the main spot for locals to turn up to a 3am on a Sunday morning and have a party.

Very early on, when looking for a spot, we found an abandoned house, and for simplicity and reassurance, we spent most of our nights sleeping here in New York. Not wanting to worry about any disturbances throughout the night.

For our first morning in Ruby, we had the delightful job of unpacking all our the cupboard equipment that we had apparently had unnecessarily boxed up for customs.

It’s crazy how much stuff we can actually fit int this van. 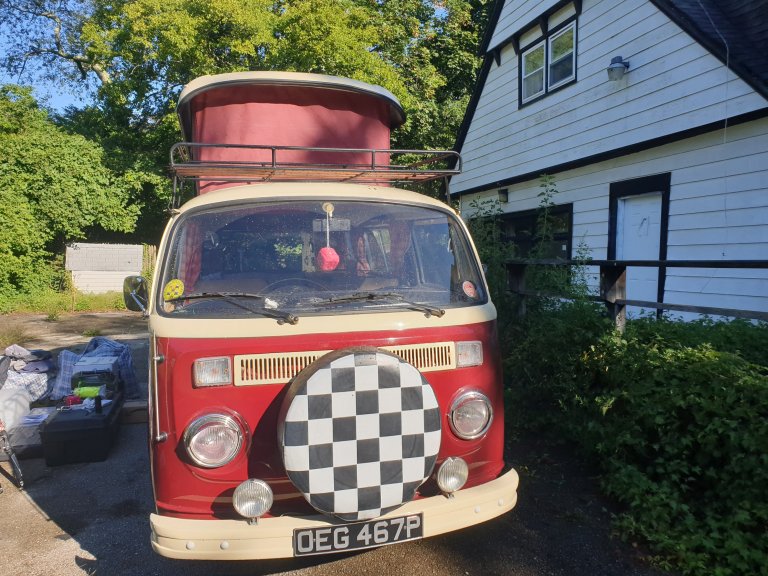 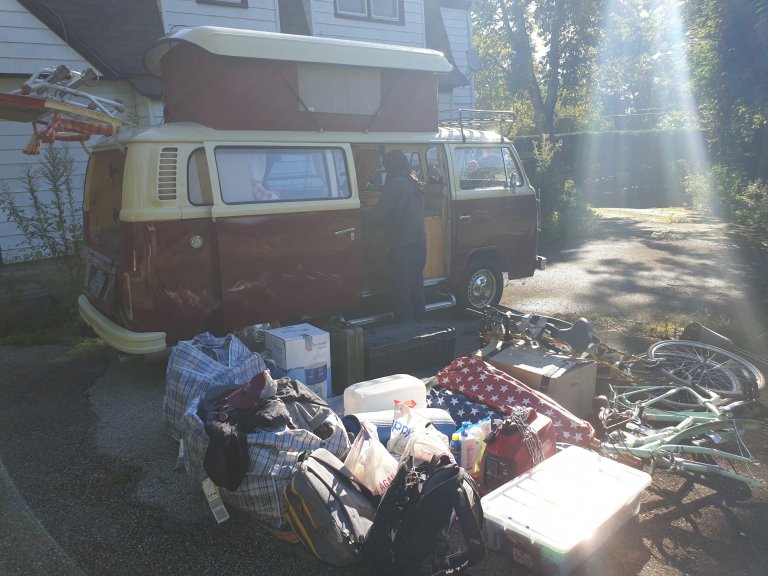 With the van packed, we were finally ready to set off. At this moment, I was hit with the scary realization…

‘Set off where? There’s so much of the place to see!’

With Willow’s camera in Philly until at least Monday, we decided to head back down to New Jersey, back towards the lovely lake we stayed at in the SUV, driving across Brooklyn Bridge amd through part of Manhattan on the way (This time it was a lot more enjoyable!) 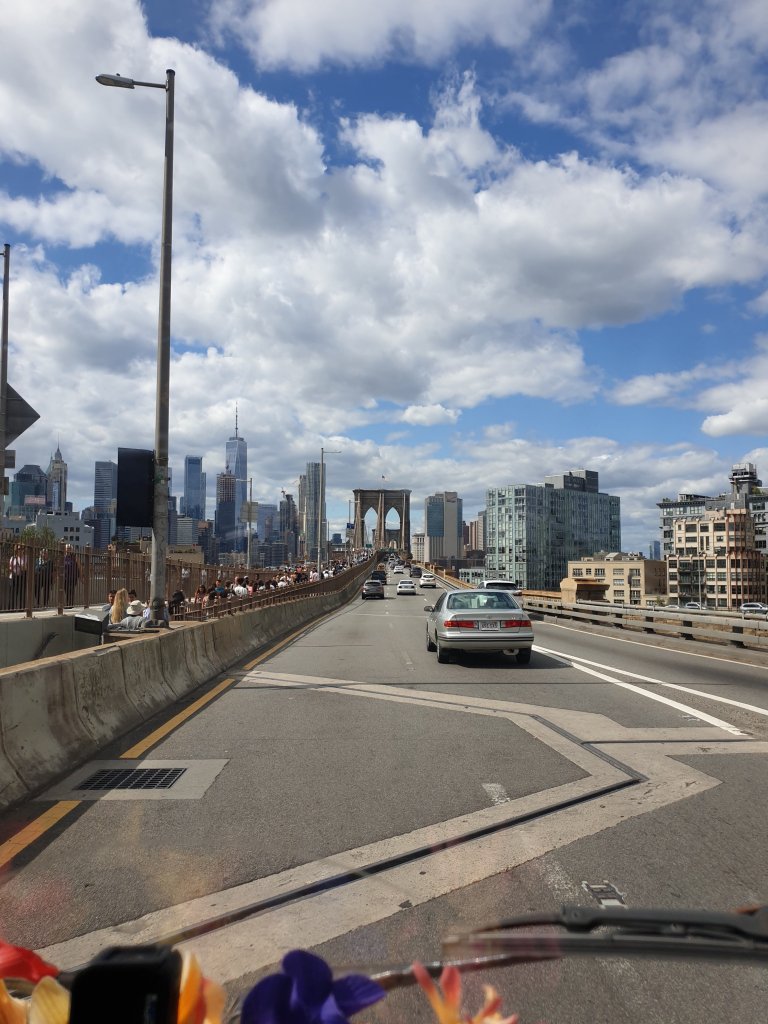 We stopped off on the Saturday night, at a state park named Double Trouble. Making it a whole day of driving without any incident.

We parked up in the main car park and set to work cooking our first meal in Ruby over in the states. We got as far as trying to turn the hob on to encounter our first problem of the trip. It wasn’t turning on.

Now although this is frutrating when it is getting late and you are starving, it is calming to know that you are travelling with someone who can most likely find and fix the problem.

So Willow set about investigating why the Wallas control unit wasn’t receiving any power.

With the batteries checked, connections to the battery checked, fuses checked and still no sign of the problem, Willow decided to pull out the wire that connected the unit to the actual hob unit. We set about testing each individual wire, checking that there wasn’t a break in the wire.

First four wires fine. Get to the fifth tiny wire and nothing. We had found the culprit.

On closure inspection of wire, it wasn’t difficult to see why there was a break in the wire. It was very close to a very hot exhaust pipe under the hob and so the plastic coating had melted way. As I have already said, it’s a good job I am travelling with Willow!

Very quickly, the wires were stripped with military precision, the soldering iron was on, and she set about reconnecting all the damaged wires.

Within five minutes, the hob was turning on, and we set about cooking our first meal.

We woke Sunday morning to find the car park heaving with people . As we sat drinking our first proper tea in the van, we watched as enthusiastic passersby stopped to admire the van.

I had assumed, that when we got over to the states, we would see loads of VWs, but after speaking to quite a few people who have come up to us to look at the van, it seems they are quite rare on the east coast.

We had a quick walk around the state park, which seemed a popular spot for local dog walkers and keen kayakers.

It wasn’t long before we were off, heading back to Lake Absegami, with a quick stop off at a local Walmart on the way.

Where do I start with Walmart? It’s crap! It is a place that has lots of everything, but at the same time, not much of anything.

For example, if I wanted to pop out to buy some toothpaste, I could quite easily grab a machete on the way. Their variety of vegetables, cheese, fish and vegetarian items is definitely way behind the selection that we have available back in England. Even the Aldi is rubbish over here. Gone is the large selection of cheese, beer and wines that makes Aldi so special to us bak in the UK.

Both shops are really expensive too. I thought, being a big farming nation, that they would have loads of different veg and it would be dirt cheap…Wrong!

A single iceberg lettuce in Walmart can set you back $3.

Overall, the supermarket experience is not great if you are pescatarian, cheese loving alcoholics.

The month’s budget probably blown already, we arrived back at Lake Absegami.

On our last night in New York, you could definitely feel a drop in temperature during the night. So it was definitely a relief to be a bit further south, where it seemed to be a bit warmer. We hit the beach for a well earned beach day.

That evening, once the park keepers had locked up the toilets and left, I set to work, testing out my new lock picking set on blokes toilet. Within twenty minutes I was in. It would have been sooner if I had realised it was a dead bolt and so I was turning it the wrong way.

I would definitely recommend you buying a lock picking kit off of Amazon. Hours of fun! Just remember, with great power comes great responsibility! We are only planning on using it to open toilet facilities, locking them back up when we are done.

We ended up spending the weekend at Lake Absegami, and set off Monday towards Philadelphia again, this time I had a steely determination to complete my Rocky tour of the city!

As cities aren’t renowned for their lake side parking, we parked up at a Walmart car park next to the Delaware River.

Now Walmart might not be great for shopping, but they are good for letting you park and spend the night in their car parks! It was actually a fairly nice view of the river where we were as well.

Parked next to a bike lane that followed the river up into the city centre, we unloaded our bikes and set off on a bike tour of Philadelphia. This way, we would be able to try a few of their beers along the way.

I have lost track of the amount of times I have had a good old Rocky marathon and so I was as giddy as a little school boy at the thought of standing in front of the big man himself. Riding through Philadelphia was actually a really pleasant way of transport. The city had very clear cycle lanes, and the drivers actually act like you exist. We were soon having a great time taking in all of the sites.

We arrived at the art museum where the legendary steps and statue are based. I got my photos and then I got Steve out to get som better footage. I could happily tick this one off of my bucket list!

From the steps, we visited a strange medical museum called the Műtter Museum. Here we found lots of strange medical items such as baby fetuses in jars, and a seven foot five inch skeleton.

The museum was home to a lot of early medical training artifacts and was fascinating if not slightly creepy.

Somehow both leaving with our appetites intact, we set off in search of the best veggie cheese steak Philly had to offer.

They were both delicious, however I must admit that the veggie option was my preferred option. Both came loaded with vegan steak and mushrooms. The total cost with 2 drinks came to $19. In my opinion mony well spent.

From Joe’s, the Rocky bike tour resumed as we set off in search of Mighty Mick’s gym. According to Google maps, we weren’t too far away.

For those of you who have never seen the Rocky movies, Rocky Balboa grows up in a rough part of Philly. From our visit to that part of town, I can confirm that it is not a nice neighborhood!

The main road was littered with empty shops and the streets were filled with people asking us for money as we rode past. It turned out, that the gym in the Rocky movies was never actually a gym in Philadelphia and we even managed to ride past the location of it the first time.

The building was empty, with no sign that it was ever apart of the Rocky franchise other than a Rocky posted across the road in a shop window. I hope that in time, the building can become more of a historical site, as the area seems to be slowly redeveloping. I definitely think that the locals could do with reminding what can happen if you work hard and never give up. Even if Rocky Balboa if fictional.

From here, we fancied sampling some of the cities beer and so set off to a punk vibe bar named Tattooed Mom. Straight away, when walking in, we were greeted by mohawks and Nofx. Not to mention it was there happy hour. I could tell me and the bar would get along quite nicely!

We stayed here all evening, and even found space for $1 tacos. Again, this place had a large variety of veggie and vegan food options. It is well worth a visit if you are ever in the area.

We eventually set off on our bikes, slightly wobbling on our way back to Ruby. Very much pleased with our day of site seeing.

We went to bed, hoping that the Walmart car park would be kind to us. Whilst we were gone, some other cars and vans had turned up with the same intention as us. Hopefully that would be a good sign that those around us would be quiet during the night.

5 thoughts on “Finally the adventure begins.”