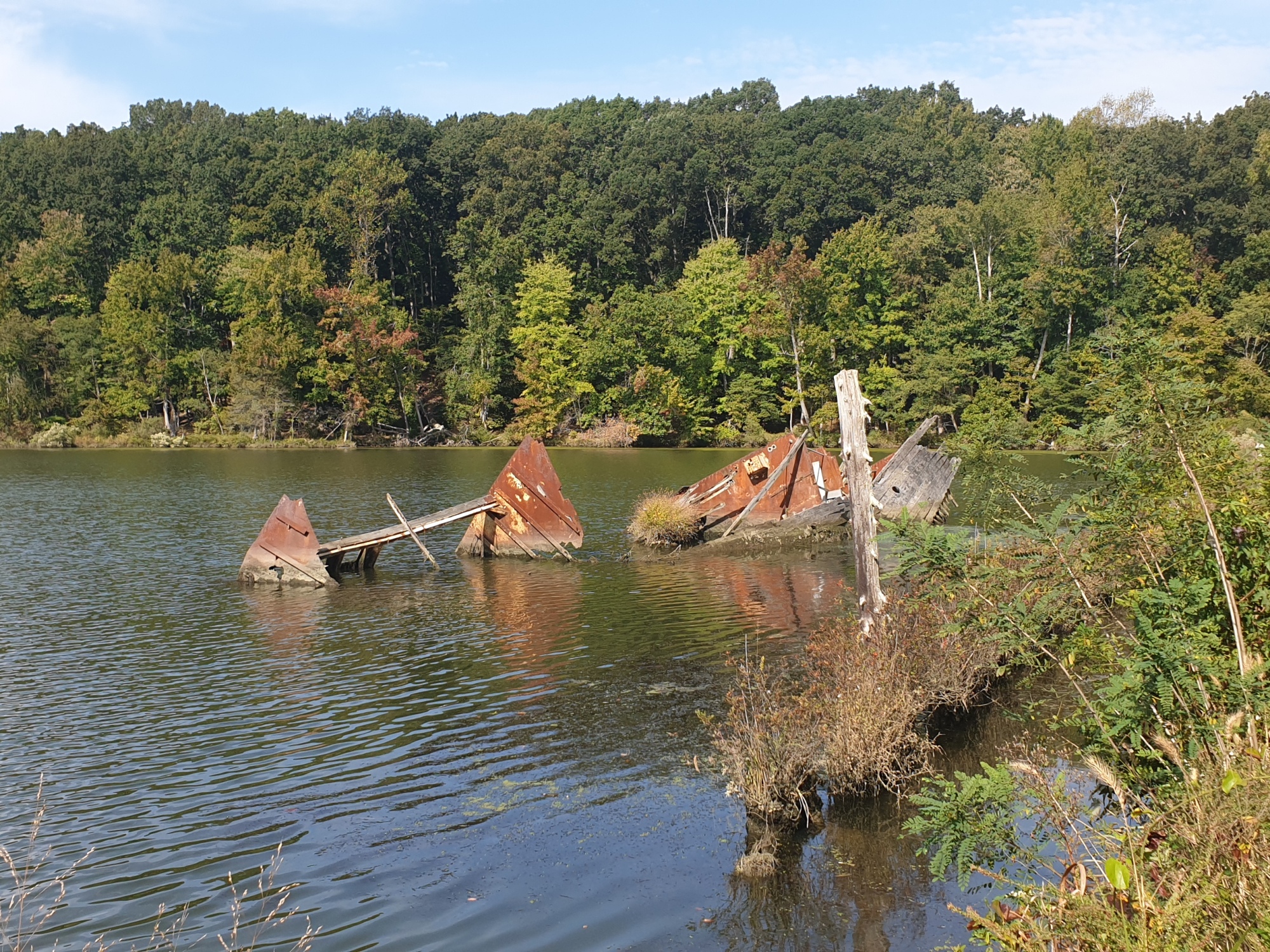 At the end of World War One, a load of poorly built and unneeded warships were abandoned on their way back to DC at a bay on the Potomac River. For the next couple of years, this site became the final resting place for over 200 boats, after they were purposefully burnt and sunk. By the time the Second World War arrived, Scavengers were sent to salvage any metals from the ships carcasses to help with wartime manufacturing.

I actually read about Mallows Bay when researching unusual activities to do on our trip. After the recent car and tram graveyards, a ship graveyard seemed fitting.

We had gone to bed the night before desperate for a good night’s sleep. We had arrived to the site late the night before and driving in the van at night can be tiring and stressful due to poor visibility and lighting. Things were going well until a lot of trucks decided to enter the park at around 4am. To be fair, we should have known better parking at the entrance to a boat launch. Everytime we have parked next to one, we have encountered some looney who has an undeniable urge to take their boat out at stupid o’clock in the morning. We ate some breakfast then moved the van into the main car park, as the barrier was now open.

We were greeted by a couple of people hanging out down near the boat launch. I can’t remember the name of the guy, but he informed us that the Major was on his way with a group of friends who were going out in a boat to see the shipwrecks.We also met a lady named Francis who was a volunteer at the park. We enquired whether it would be possible to hire some kiyaks to go and look at the wreckages closure, as there were some kiyaks lying around in a convenient location. Unfortunately, these were for the Major and his friends and it wasn’t possible to arrange anything else at such short notice.Francis went on to tell us about the history of the site and how they are trying to have the park declared a national park.Sadly, over the years the wrecks have sunk further into the river, so only 2 were now clearly visible.

Francis enthusiastically pointed towards some wrecks that were submerged close to us, but I think she was clutching at straws a little. The best you could see was a small bit of wood sticking out of the water.With not much else to see from the land, we set off back to the nearest town. We were in desperate need of a launderette. My boxer situation was looking grim. I am not sure what to do after you have worn them again, only the second time inside out??Clothes clean, we decided to find a cheap local bar where we could use their WiFi to update our blogs. Google suggested a bar that we had already driven past named Woody’s Tavern. With $1 draughts, it seemed an ideal place to go.We arrived half an hour before it was due to open, but we decided we could sit outside and enjoy the warm sunshine that we were experiencing.3 o’clock came and went and there was no sign of anyone coming to open up. As we were out of drinking water, we decided to open a beer and commit to someone arriving as we really could have done with WiFi.After hanging around for almost 3 hours, a lady finally appeared round the back. Without even a hello, she sternly informed us that we were not allowed to be sat outside drinking a beer. She then seemed paranoid that their was someone else in the van. I tried to apologise and informed her that we had been waiting for 3 hours and had no drinking water left. She abruptly left us to finish our cans in the van.Shortly after, she returned outside and glared at us whilst we were tidying up the van. At this point, we had both had enough of her behaviour, surely she didn’t think that was the right way to treat potential customers?After giving her a piece of my mind, we set off in search of another bar. There wasn’t enough cheap drinks and WiFi to convince me to spend a single second in that place!Fortunately, Google suggested another bar named Lisa’s Pub, just round the corner near the launderette we used early. And as luck would have it, that lady did us a favour as we were clearly destined to end up at Lisa’s.The bar area was fairly busy when we walked in, and you could almost feel everyone’s eyes burning a hole through us. It didn’t actually start great in Lisa’s, the barmaid asked us what we would like, which Willow replied ‘Something cheap and cheerful!’ After some quiet deliberation, the barmaid told us that we would be better off at Woody’s. This is where we told them about our recent experience there, it is at this point that things quickly improved. The barmaid let out a huge laugh and told us that that sounded about right. Apparently the rude women was the owner. Other people from the bar suddenly enjoyed the conversation, and a few choice words were used to describe the owner of Woody’s.We were offered a seat at the bar and quickly set about getting to know everyone. Coincidentally, the name of the barmaid at Lisa’s was Ruby! That confirmed we had made the right choice. Throughout the night we would also get to know Jane, Fran, Ruth, Donna, Catherine, Dana, Butch and Wayne.

Apparently on Mondays, Lisa’s has developed a bit of a tradition of bringing in food items to share around. Not wanting to take advantage, I popped to the van and brought back some blue cheese and some hummus.

As we ate, we chatted some more to Jane, who told us a bit more about herself and those around us.Jane was an absolute sweetheart and before leaving, invited us to stay at her house which was a couple of minutes down the road, offering us her spare room and a shower in the morning. We gladly accepted and told her we would see her soon.Well, soon didn’t happen as soon as we expected. With Jane gone, we started speaking to Dana, Ruby and Wayne.We were having an absolute blast. Wayne was teaching us how to play the video games at the bar, and Ruby and Dana told us more about their lives. If that wasn’t enough, Willow even received a Lisa’s Pub hat and beer cooler! This place was definitely our new spiritual home!

Butch actually arrived a lot later in the evening. He works at a fast food restaurant in the day, then turns up at Lisa’s to help tidy in the evening. He showed us his pride and joy bike and when I asked if I could take a picture his eyes lit up.

He then asked Willow if she would like a picture on it… which of course she abliged.

Throughout the rest of the night, Ruby introduced us to Fireball whisky and Dana got us hooked on a lottery/bingo type game that was happening on the TV. The night was going so well, we even managed to win!

Eventually the night drew to a close, and we set off the Jane’s house. As it was now much later than we were originally planning on arriving, we doubted Jane would still be up waiting for us, so we parked up and slept on her drive.The next morning we were abruptly awoken by the sound of the local fire station air raid siren, followed by the American national anthem from the local navy base.We were met by Jane who made us breakfast and told us about her life as an air hostess. We were then both treated to warm showers and were able to use were washer and dryer to wash more clothes. And to think if things had turned out differently, we could have spent the night with old misery guts at Woody’s.We thanked Jane for her kind hospitality and then got ready to leave.

She sent us on our way with home made apple sauce, an apple and some sparkling water. I felt so grateful to have met Jane and the lovely folk of Lisa’s and will fondly think of them every Monday, tucking into their shared lunch, tasting some exotic meal Jane has prepared to broaden their horizons!We left Jane’s and headed to a town called Waldorf in search of butane for our gas cooker. Annoying, Walmart did not have any in stock, contrary to what their website said.We left Waldorf and headed to a place called Calvert Cliffs State Park. Supposedly if you went at the right time you could find shark teeth fossils.For a while, we had talked about how nice it would be to rescue a kitten and bring it around with us in the van. Sadly, so far we had not stumbled upon a litter of kittens in need of a new home. I had however spotted an advert of Craigslist, advertising the rehoming of rescue kittens and so sent them a message on the walk. To my surprise, they replied fairly quickly, informing me that they had a foster home near Waldorf and gave me contact details. It was this point that our dreams of rescuing a kitten were becoming a bit more real.Calvert Cliffs was a short walk from the car park to the coast. The trail leads your through a bog which seemed to be popular with big birds. So far we have seen many new animal species, most of which were lying dead on the side of the road. We were really keen on spotting some eagles on our travels, we have only ever spotted two in Scotland, and they were never really clear from where we were.This walk would turn out to be the one where we finally spotted an eagle. As you can see from the next two pictures, Willow’s camera does a much better job than my phone’s camera.

Although a short walk, the big was kind of awesome.

We arrived at the beach and immediately set about digging for shark teeth fossils. After about 40 minutes of digging, we eventually gave up. No sharks teeth were found. We did find a few other fossils though!

We headed back to the van with an extra spring in our step. Joseph, the cat fosterer had some kittens for us to view the next day back in Waldorf. So that night we made our way back to a nearby Walmart after exhausting ourselves driving around trying to find somewhere a bit more scenic.The next morning we hit the local Dunkin’Donuts to use their WiFi, seeing as we failed to use any during our night at Lisa’s.After about 3 or 4 hours of blogging, we decided we’d had enough and so set off for a small nondescript walk at a place called Myrtle Point Park.The walk was pleasant enough, although I could think about was that we may have a little kitten by the end of the night. We did watch an eagle attacking a seagull, but I wasn’t able to get a decent picture of it.The time eventually came for us to set off to Joseph’s house. In the next couple of hours we would know if we would have a new family member for our van life.