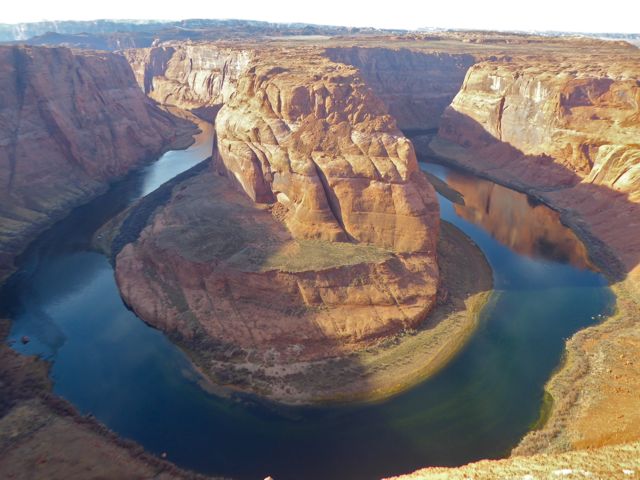 I woke early to the sound of some of the RVs leaving early. As we were near no major roads, I let Aimee out, who immediately wandered across to the next nearest camper and tried to climb into it! I wasn’t even surprised anymore.

After Aimee had explored enough of the campground, we drove back round to Willow’s parents hotel. They had plans to visit the marina at Lake Powell, so we left them to it, as Willow had found a nice trail for us to hike. Saying goodbye, we watched them leave and them walked to the start of the hike, which was only a couple of minutes away from the hotel.

We brought Aimee along with us, as she had been cooped up the last couple of days, and we wanted to keep her in the routine of walking with us.

Clearly this was important as she was fairly hesitant at the start. Preferring to sniff the bushes around us.

The walk is a loop, which takes you round the outskirts of the residential area and the minor air strip of Page. It was slow going at the start, trying to encourage Aimee to follow us, and after a while I carried her inside my hoodie, so we could make up for lost time.

Around two hours in, we moved away from the residential, and the landscape around us changed into expansive desert, with small rock formations lurking on the horizon.

You could see that the area was a popular spot for off-readers. With dozens of trails for ATVs and 4x4s. Definitely something we needed to try during our time over here.

Aimee went from enjoying the walk, to lying down in a sulk because she didn’t want to move any further. We had hoped to meet up with Willow’s parents, to explore the Horseshoe Bend, carved out by the river, and so we decided to cut out the last corner to make up for lost time.

From here, we had a lovely view of the river which fed into Lake Powell. A man made lake, created by a dam in the canyon.

Carole phoned us, to let us know that they were finished at the marina and so they were going to go on a head and meet us at the river. About ten minutes later, she called again to let us know that you had to pay to see Horseshoe Bend and that it was incredibly busy. Seeing as we had cut a section of the hike out to get to it in time, we told her that we’d meet them there.

We eventually made it back to Ruby, Aimee relieved to skulk off to her bed. Horseshoe Bendwas near to where we were parked, so we made the short drive to where Willow believed it was, only to find out that it was the viewing point for the dam. As we were there, we decided to have a cheeky look.

After locating where the river overlook actually was, we drove off, driving past the Walmart we had stopped off after enquiring about Antelope Canyon.

Antony and Carole had already walked down to the overlook and they were ready to head off to Zion to get checked in, so we once again said goodbye and made our way down to the looking point.

Horseshoe Bend was impressive, but I much preferred the Gooseneck overlook we had visited during our time near Valley of the Gods. I found the view more enjoyable, and it definitely helped that we were the only ones there.

After we had taken our pictures, we hastily made our way back to the van, and set off once again down the same road we drove previously. This time, we had a drive belt and so we were blue to complete the whole drive without stopping. Luxurious!

After reuniting with Antony and Carole, we headed back to our old campsite next to the river, Willow’s parents following behind.

That evening, we cooked once again in Ruby and let Aimee explore outside her ‘old stomping ground’ this time of her lead as it was now dark.

In the morning, we let Aimee loose whilst we cooked a warming breakfast. Excited to be able to explore a little bit more of Zion. This time in slightly nicer weather.

Once again entering a national park using Victor’s park pass, we parked up in the all too familiar visitor centre car park. We had decided to hike a trail named ‘The Watchman’, which started from the actual car park. This meant we were saved having to listen to the same informative announcements on the shuttle bus.

The Watchman trail was described as moderate, as was less populated than the other walks, which once again had crowds of people lining up for the shuttle.

The hike was fairly easy going, if not a little muddy. The recent snow had since melted, leaving behind a well trodden on mush. At least there was no danger of hypothermia if any of us fell this time! We made it up to the view point and were rewarded with a different section of the valley to gaze upon. Willow was enjoying testing out the camera capabilities on her new phone, and soon it became a competition as to who had the better phone. Mine had been put through the ringer, and was starting to struggle. The camera would judder whenever you tried to zoom. But as I am anti Apple, I still argued that mine was superior.

We returned to the car park and said good bye to Zion for the final time. Thanks to Victor, we had visited the park three times, not having to pa once. And the majestic surroundings had truly stolen our hearts.

Soon we were completing another familiar drive. This time back to Vegas. New Years Eve was fast approaching and we wanted to be in Death Valley to celebrate.

Willow’s parents had been unable to book the same hotel, but they were able to book a Holiday Inn right next to it, so we were parked in familiar grounds. This time just next to the graved overflow car park we stayed in previously.

In the morning, we would drive into Death Valley and ring in the New Year a bit differently.