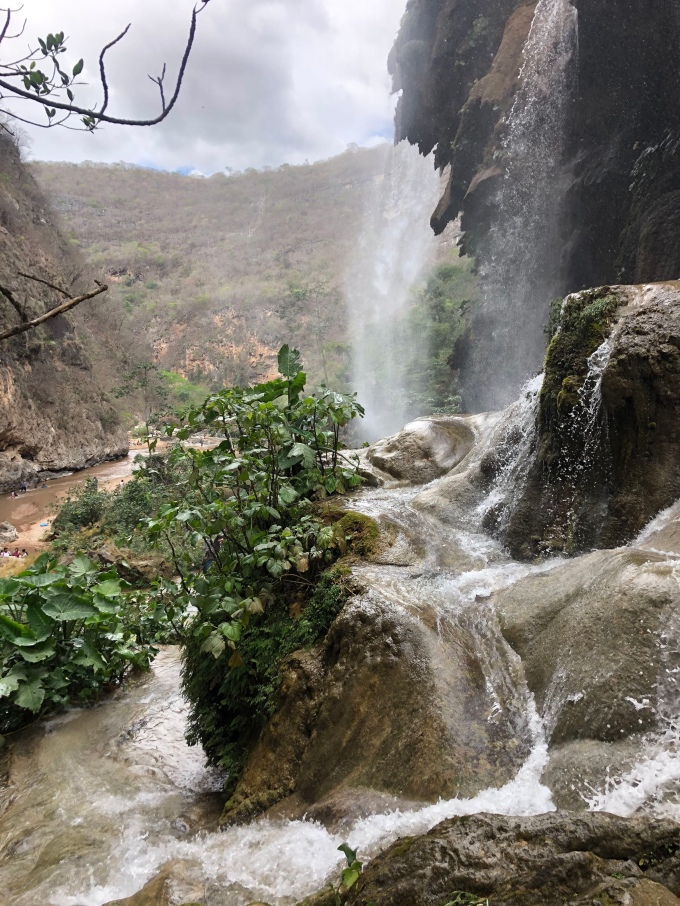 Not only did we have a long drive to do that day, supposedly littered with military checkpoints, but we needed to do some shopping in the town of Salina Cruz first. We had packed up and left the restaurant by around 8am that morning. As we were now heading away from the coast, we wanted to get the cars washed to get rid of the large amount of salt they had been sitting in for weeks, all of this was taking its toll on Ruby’s bodywork.

As we know now from too much experience, things are not as easy as they could otherwise be. We filled up our water tanks, bought some fishing line for all the fish we planned to catch at our next destination and headed for the supermarket. Our plan was to spend the next week at nice looking lakeside spot in the mountains before Tuxtla. Here we could avoid the beach crowds and spend some time in the peace and quiet waiting for a set of new gas struts for our now nearly impossible to lift pop top, and Lee’s passport.

We did a huge shop at Walmart, for a week’s worth of supplies and then decided to head to the car wash. Ruby had other ideas and refused to start. The other two headed off in advance, leaving us to puzzle over the issue. The starter motor was in need of a rebuild, but still turning the engine. We had a spark. It sounded like the immobiliser was kicking in and then we found a corroded fuel pump connection on the switch. Happy to have found the issue, I bodged for now and tried to turn it on. No such luck. After sometime, we found that a soldered connection on the transponder had come loose. Apparently a can of beer from out bulk shopping stack fell over and hit it, knocking the internal connection loose. Lee went to buy a soldering iron to fix it. I soldered it and she fired up. We didn’t leave straight away, Lee had eaten something that didn’t agree with him and had already spent a large part of the day glued to the toilet. So, by the we were ready again, the engine wouldn’t start. Again. It was pretty fiddling trying to solder the sensor inside a cupboard and I clearly hadn’t quite got it.

We proceeded to rearrange the entire back of the camper in the car park to get access. Then the brand new soldering iron broke. I began to feel that the universe was conspiring against me. Fortunately, Ian had caught us up from his time buying a surfboard in Puerto and he happened to have a soldering iron. We soldered it properly, put it all back together, and finally drove to the car wash. Our unlucky afternoon was about to get unluckier.

After a long time at the car wash, which did a pretty mediocre job, we finally headed north. We had planned to drive all the way to the lake, but it was now to late in the day. There was one spot on iOverlander that was not a Pemex. The others had a head start on us to get there and we didn’t see them until we were around 10 minutes away, heading back towards us. That’s never a good sign. Unsurprisingly, it was closed for covid.

It was these series of events that led to us sitting in Pemex, Lee rushing to the toilet on a regular basis while I did my best to consuming the offending beer cans. While Aimee didn’t appreciate not being allowed out to roam, as petrol stations go it was a pretty quiet one, so the only thing that kept us awake that night was her relentless attempts to get out of the window.

When we awoke in the morning, we were already one down. Jaro, visa deadline fast approaching, had left for the border. The other three of us made our way towards the lakeside destination in the stifling heat. We arrived there mid-afternoon, a lovely looking spot nestled in the mountains.

Hanno and Kikki were scouting out a good parking spot, and we settled for a spot away from the main ‘visitor centre’ (actually a restaurant that really wanted us to eat food we didn’t want). Out on the lake the locals fished. This consisted of two guys in a small row boat with a net. One had a big stick and one had a paddle made out of tying a bucket lid to another big stick. The dropped the net and while one paddled the other beat the water with his stick, I assume to scare the fish into the net. Apparently they were catching Tilapia, and that’s best at night. So that night we well asleep to the swish of  water being paddled with a bucket lid and the crack of being slapped with a stick that followed.

The town was small, but had a quite a few wifi spots, which we checked out. None of them was going to let you watch a video, but if you were patient you might get a webpage to load. We sat outside the shop and wrestled the slow internet. Before too long we had a drunk local insisting we buy him beers and commenting on my ‘nice’ laptop. He clearly thought we fell into the ‘rich gringo’ category and while hating that was happy to try and get money from us.

Back at the campers, the wind from the beach had followed us. Out of nowhere in the middle of the night it beat against the sides of our pop-top and deprived us of any sleep. It stirred the lack from being clear-ish to properly muddy and made the idea of going in it quite unappealing.

Another thing becoming unappealing was the locals, while some small poor towns will welcome you in all smiles, this was not one of them. Lee went to re-upload a new passport photo after the government rejected our previous attempts. This was time consuming adventure and he came back unsuccessfully the first time, after a another group locals started being aggressive towards the ‘gringo’. If they were like this on a quiet Wednesday night, we wondered what they would be like full of tequila on the biggest holiday of the year.

The odd unfriendly comment alone, would not have been enough to make us leave. plenty of other people were nice and friendly to us while we stayed there. The truth is that we were bored already. We had spent a lot of time recently doing not a lot and we wanted to move on. We wanted to try and beat the rainy season in seeing Chiapas and so we decided to risk the Easter weekend crowds and move on.

It was only an hour drive from the lake to our next stop, Cascadas el Aguacero (which means downpour), a famous waterfall only an hour from us. Ian followed us to the turn off before continuing on to Tuxtla where he would be storing his van for a few weeks while he returned back to the US to tie up some loose ends. The rest of us headed down a little dirt road to the car park.

We had arrived early and so we got some things ready and prepared to spend the day down at the waterfall. With over 700 steps to descend to the valley, we made sure to bring everything with us for the day. As we descended the valley came into view below us.

After a long descent which I am sure would be felt in the morning, we arrived in the valley. The shallow river flowed over a sandy river bed, jungle either side. Walking a little way upstream leads to the waterfall, while heading down the river a short way will bring you away from all the people with the place to yourself. We headed downstream for a walk first. Despite the fact that the water looks muddy, it is in fact crystal clear and it’s just the colour of the sand.

We some way down the river in the water, past all kinds of bright jungle plants.

Despite the fact that it was a little cloudy, it was still very hot. We stopped at a particularly shallow point in the river for a cool off. I didn’t particularly want to leave my spot and Lee had found his happy place too.

After returning to our stuff, we then headed in the other direction towards the cascade. We met Hanno and Kikki coming the other way as we headed towards on over the rocky banks towards the main attraction. They warned us of the crowds as we passed.

The waterfall was definitely more crowded, families climbed it, lay in the bottom and picnicked on the banks.

Despite this, it was possible to some nice photos.

We headed upstream a little way too, a surprising contrast from the river in the other direction before heading back to base camp.

At around half past two, we began to make our way back towards the camper. We had been told me needed to pay for camping by three thirty if we were staying. The car park had filled up dramatically by the time we returned and I fully believed the lady on the gate who said how busy it would be tomorrow. There doesn’t appear to be any kind of capacity limit in place here. We moved the campers to the far end of the car park where it was quiet and near the woods for the cats. Aimee promptly disappeared, but we were happy to let her enjoy herself here. It was quiet and safe and soon she would be cooped up for some time in the city. 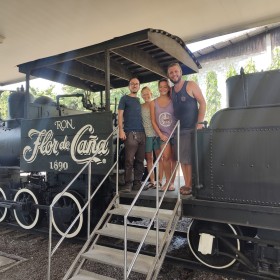 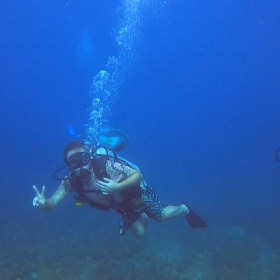 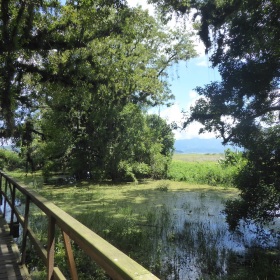 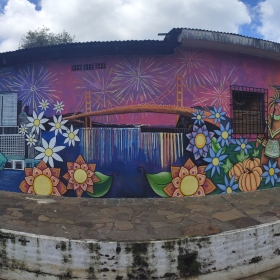 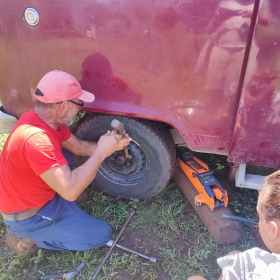 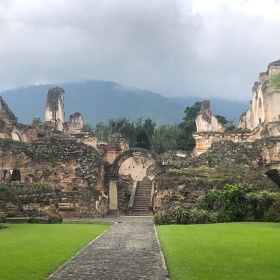 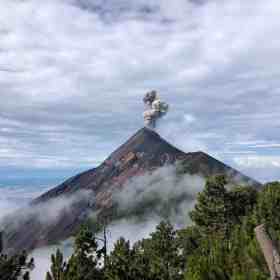