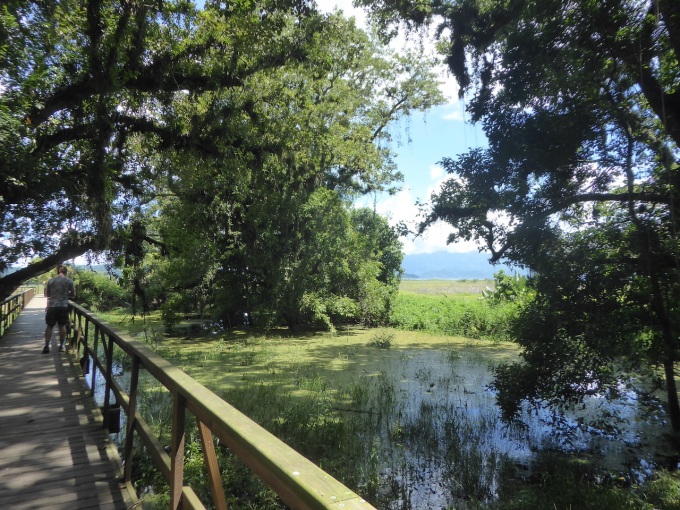 We had learnt from previous experiences, that it was a bad idea to arrive at the border midday. We were still carrying around a large amount of Guatemalan quetzals as our El Salvador border crossing had been at a time when all the money exchange people were on lunch.

The problem with the El Poy border crossing, was that it was several hours away from anything. In the middle of the mountains, this was predominantly a trucker border and so it was after a steady three hour drive from Sochitoto that morning, as we zigzagged up the mountains behind various slow trucks, that we arrived again at lunchtime.

The immigration office stamped out our passports in a matter of minutes, then we were told that the guy from the aduana office had gone on lunch. So we sat and waited an hour for him. At least this time we exchanged some money while we waited. Entering Honduras, the first thing to do is find where to go. The borders are all a bit different and all a little chaotic. Do you need the small blue shack or is the permanently parked truck office? Having been directed, we went to the covid checkpoint. Here they also wanted proof of our yellow fever vaccine, that would be a problem because we don’t have one. I had already checked several times however, this is not an entry requirement for Honduras or any C4 country unless you are coming from further south. The women was not impressed, she muttered to her colleague we couldn’t come in. We explained that it was not obligatory and she went back to checking her list, sellotaped on the wall. Eventually, she angrily declared we could come in but it was at our own risk. As there is no yellow fever in Honduras, that is a risk I am more than willingly to take.

We continued to immigration and then after some time located the aduana office. It was a good 500m down the road, right next to the final line of traffic cones that marked the entrance to Honduras. The paperwork was a painful affair. We handed of our paperwork from El Salvador, which contains all the information they needed, but it still took them an hour and a half and the entire office staff to produce our paperwork. I kept asking if we could help as we heard them discussing engine size and vehicle age but they were happy to take their time. In the end they produce our TIP, which now stated I was Irish. Thinking it as unlikely that anyone would know the difference between Irish and English anyway here, we finally drove off.

If the mountain road to the border had been tough, the other side was no exception. The landscape was beautiful as we drove through the mountains, but we were constantly juggling an overheating engine or overheating brakes. Eventually the road levelled out, but now we needed to worry about potholes instead or just the road as it suddenly ended in a section of dirt road for several metres. Again, we crawled behind trucks as we slowly made our way to Copan. It was a four hour drive from the border, and thankfully the last section of road was a lot better as this part we drove in the dark.

We arrived at El Bosque hotel and parked up around the back. We ordered pupusas from the petrol station as no one felt like cooking after what had been a very long day. Tomorrow we would visit the famous mayan ruins here.

Despite our close proximity to the main road, we woke feeling rather refreshed after a fairly peaceful night, we decided to walk to the ruins. We have seen a lot of ruins so far, so we debated whether we really wanted to see anymore. However, the pictures looked pretty nice and there was also supposed to be a lot of macaws in the surrounding jungle. The was certainly true, the first thing we saw when we entered the site was macaws everywhere.

Compared to Tikal, Copan is much smaller, but we still spent a good couple of hours walking amongst the pyramids and admiring the intricate carvings that were abundant at this site.

There are several different sites inside. Some are tombs, others ball courts and other official buildings. This was a cultural centre for the city when it was populated, rather than a residential places. From here, the powerful figures of the time controlled the area and sacrifices were made to the gods.

As we left, we got talking to a local family who took our picture with the macaws for us while I got harassed by a turkey.

We still had the afternoon, so we headed into town for a new SIM card. No data is not fun. We planned to stop one more night at the hotel, making use of their showers before heading off in the morning again. The next stop was one that had got Lee all excited, D&D Brewery, located in the jungle by Lago de Yojoa. It was another long drive, but this time only 5 hours instead of 7.

Ruby seemed to be complying, although getting through a lot of oil, but we made it to the lake with no problems. We parked up in the field opposite the brewery and let the cats out after a long day stuck inside.

We headed inside to get stuck into the beer. Naturally, the first step was to try a flight of beers and while Lee was fairly happy I was pretty disappointed. They all tasted the same and to make matters worse it wasn’t a taste I liked.

We ordered some rather disappointing food too. The staff were friendly enough though, and it was a gorgeous setting, sitting in the jungle surrounded by hummingbirds.

There are two parks nearby, Parqueo Los Naranjas and Parqueo Paraiso. We visited the former first, only a short walk away. It was a pretty place, crossing over the bridge to enter the river was full of people kayaking down to the lake. Something we also wanted to do.

Inside, there are various trails around the park, including a boardwalk which takes you down through the jungle and across marshland, towards the lake.

Here there is a viewpoint out across the lake itself, before you continue on.

It was a shame that some of the trails were closed off as it was a pretty walk and I would have happily gone around the whole site.

Back at the brewery we had discovered the best thing there. The breakfast. I am not a fan of breakfast, but this is more of a brunch affair. A typical Honduran breakfast is a sizeable and filling thing. As standard you get 2 eggs, plantain, beans, cheese and tortillas. Then you might get extras like pickled onions, avocado or sour cream. As you can see from our faces, we liked the breakfast so much that we ate that nearly every day, later that evening trading the disappointing beer for one two many gin and tonics when they became a special offer.

With one final day left, we headed to the other park. This was my favourite, crazy jungle flowers were all around us, pollinated by the bees.

We had the trails to ourselves as we hiked through more jungle up to a different viewpoint of the lake.

The park is kind of split in two by the river, so after hiking to one of the viewpoints we returned back to the river. Here was were the people were, a few families barbequed and swam to the backdrop the largest bamboo I have ever seen. Below you can see Lee expertly demonstrating their size.

We headed to the bridge across the river, in order to hike the trails on the other side.

There is also a viewpoint from this side, offering a welcome sit down after hiking up the hill in the hot humidity of the jungle.

The trail continues on, looping back around to a spring and a blue pool, before rejoining the main trail at the river, bringing us round the exit again.

The one thing left we wanted to do was kayak down the river, but in the end we never made it. Not wanting to stay another night with our ever shortening visa, we paid our rather large bill and headed off for La Ceiba.

We ended up in a beautiful spot by the river that night. It was nice and close to the town ,meaning we only had a short drive to get ready for the ferry to Utila the following morning. A rather last minute decision, we had deciding to try scuba diving, it being the main thing to do in Honduras and also the cheapest place in the world to learn. We had arranged with the dive school that we would be on the island for 10am, ready to start our diving course in the afternoon. We would leave the camper at the car park in the port and take the cats with us for a few days living in an air conditioned hotel room. We spent our last night in Ruby by the gently running river, enjoying the peace and quiet out here before the busy day to come. 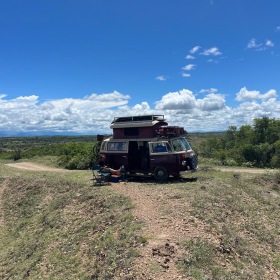 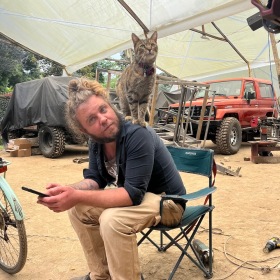 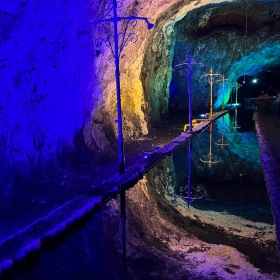 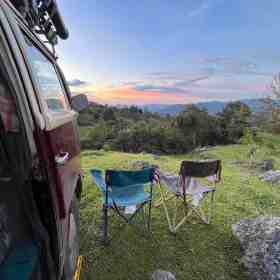 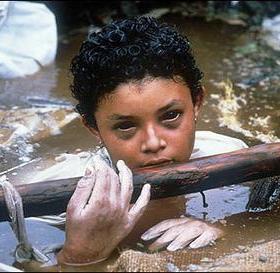 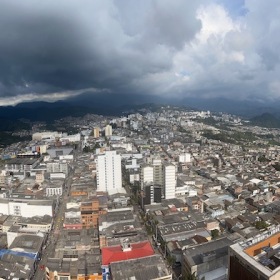 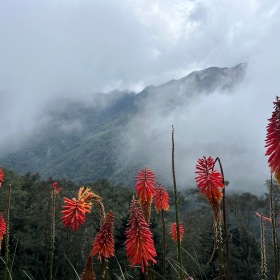