We awoke to a fairly grey morning, which wasn’t a problem as today was a bit of an admin day. We decided to try shopping at Sauders, as recommended by Anita. Since being in America, we had struggled to find any reasonable priced groceries. We naturally headed to Walmart, just because we knew what it was, but unlike the English counterpart it was incredibly expensive for a lot of groceries. Sauders was an amish supermarket, which started off well for me when I spied this outside the doors. 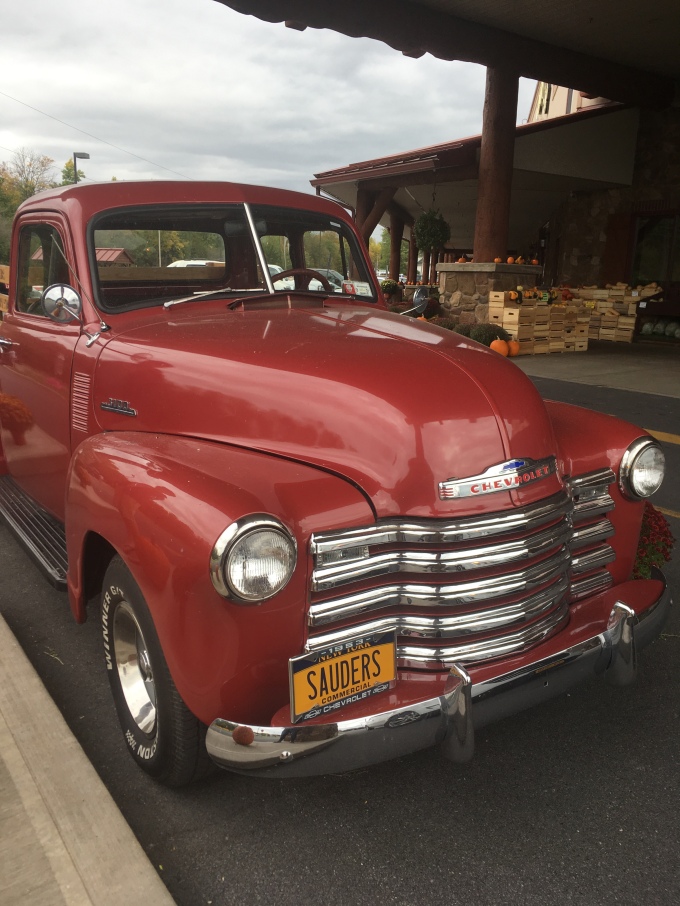 Already sold, we headed inside and found that it is actually possible to buy things for a reasonable price and that American does actually sell cheese that isn’t cheddar or mozzarella. Having stocked up, we did a few more menial jobs including the laundry, before driving to Letchworth Park which was a recommendation from Ken’s friends the previous night. We drove through utterly torrential rain, which was so heavy that I nearly had to pull over. By the time we arrived just after 5pm it had cleared up, and after driving a short way into the park we realised that a) it was absolutely huge and that b) we were unlikely to be able to stop here.

Still, you wouldn’t get far wild camping if you didn’t chance it, so hoping that it was too big for them to check all the car parks we parked up. We contemplated hiding the van behind the toilet block, or down the hill but it the ended we didn’t get far before the police arrived. Unsurprisingly, while she didn’t tell us to get out, she did tell us we had to leave by 11pm. Having expected this to happen, it didn’t take us long to leave as we hadn’t unpacked. The only thing we had to do was pick this gigantic puffball mushroom that we found: 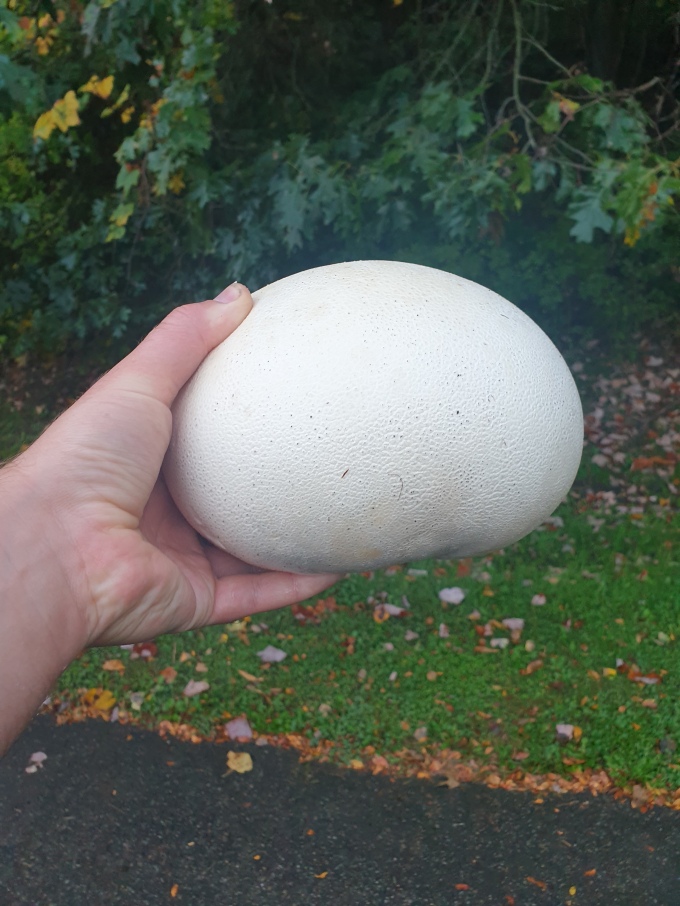 We decided to try and drive past the campsite to see if we could blag a free night, but it was clear that was also a no go. So all we got was this view on the way out to try and find another spot. 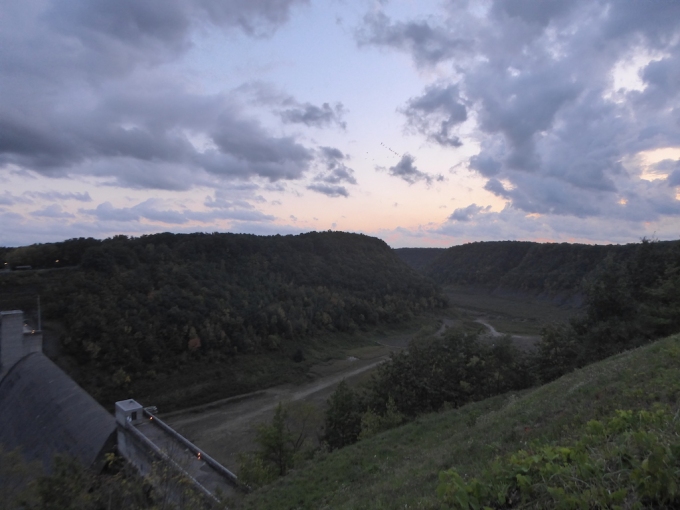 As we left the rain started again, and it was now dark. Both are not the ideal conditions in which to spot a good parking space. We headed towards Silver Lake nearby which looked like it might have somewhere. In the end we found a car park for the boat launch and went for that. We then made something that is probably best described as mushroom based pizza (we could only just cook the slices as they were the same size as our biggest saucepan), and settled down to watch Mindhunter while waiting to see if we had poisoned ourselves.

The good use was that we had correctly identified the mushroom and we didn’t die. The bad news was that the car park was like many car parks and full of weird people at weird times. It was probably to be expected as it was where people came to fish, not that fishermen are necessarily weird, but they definitely seem to like rocking up in the middle of the night and parking suspiciously close to you.

We were on a deadline when we got up as we found out that if you got to the park before 9am, it was free. After 9am you could drive in the exit which had no barriers, or pay $10. Not sure that our moral compasses would stretch to $10, we got up early. I was quite smug when we arrived at 8.56am and sailed past the entrance barriers. We made our way to the nearest car park to drink our tea and make a fried breakfast in a desperate attempt to now eat the ginormous mushroom that was taking up the entire fridge door.

After, heading down the gorge we had some fantastic views of the gorge. 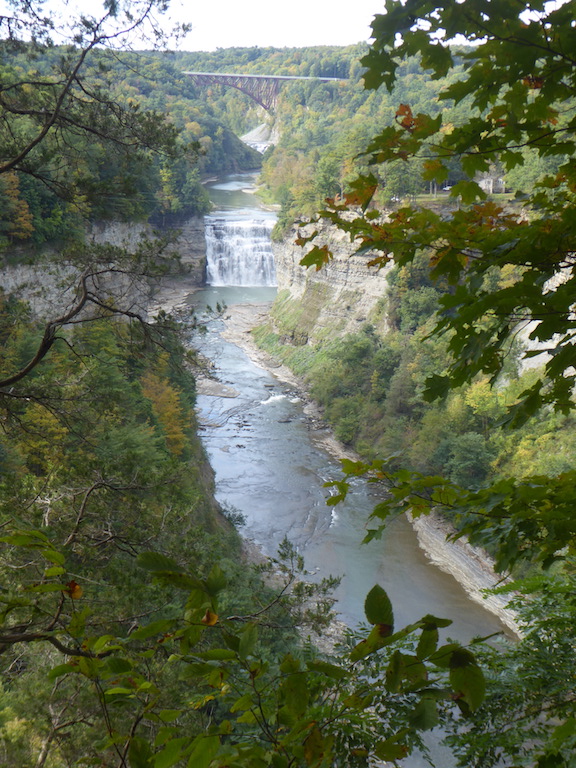 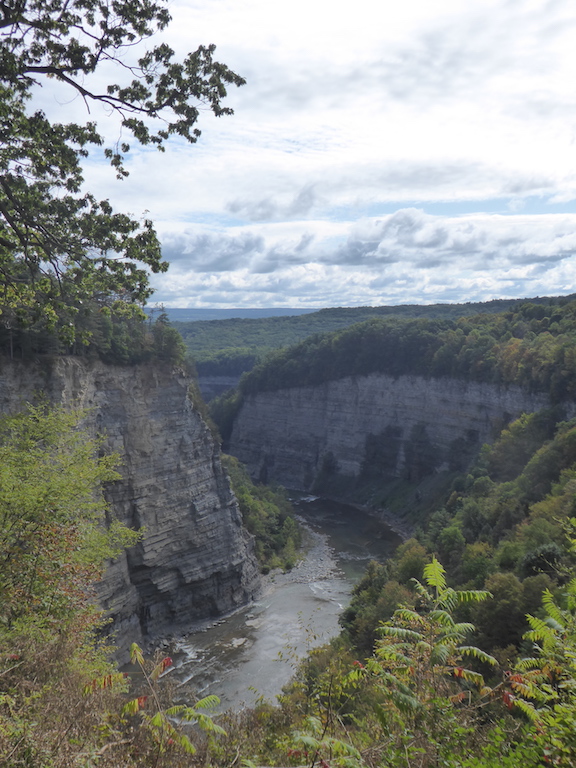 We were glad we made to effort to get here as it was a lovely place. I imagine it’s even better in a few weeks when more of the leaves have turned. They are just starting at the moment. 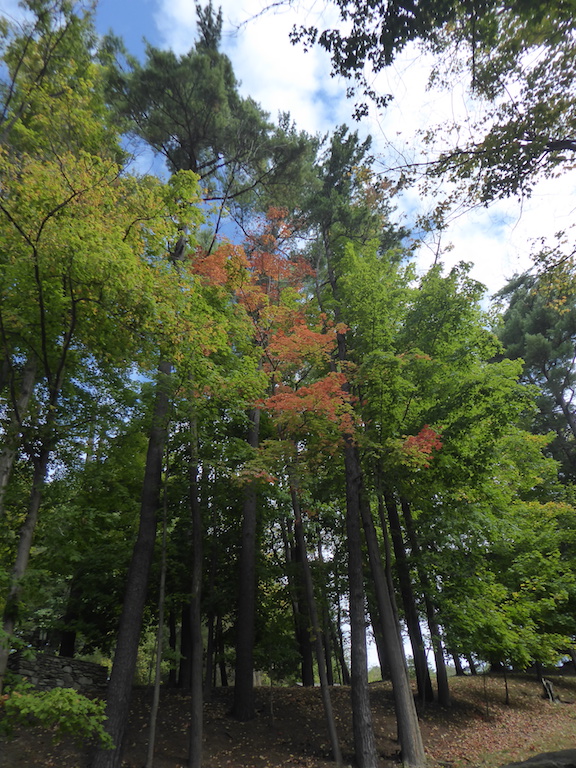 At this point we fly Steve out over the river to get some good shots of the waterfall. 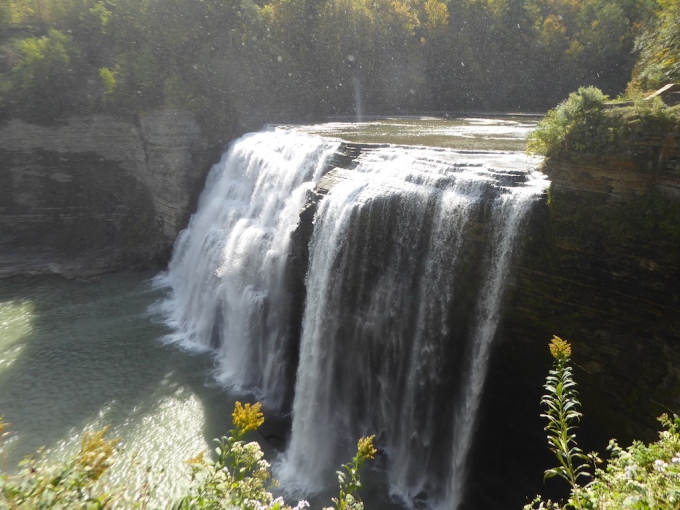 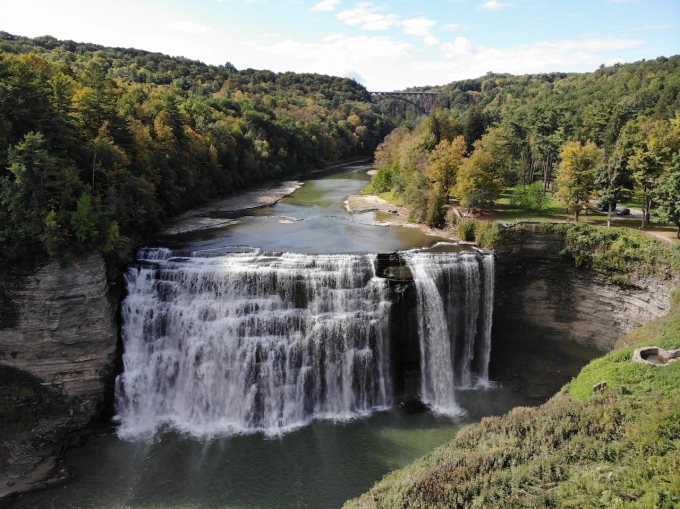 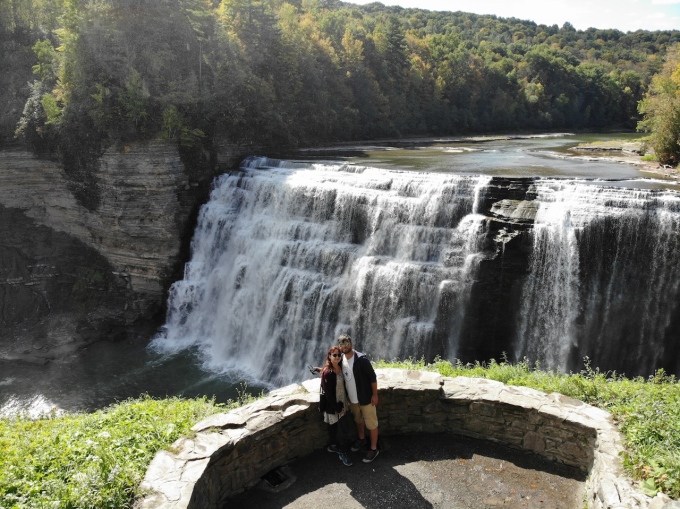 A view of the bridge and the falls near the south entrance of the park. 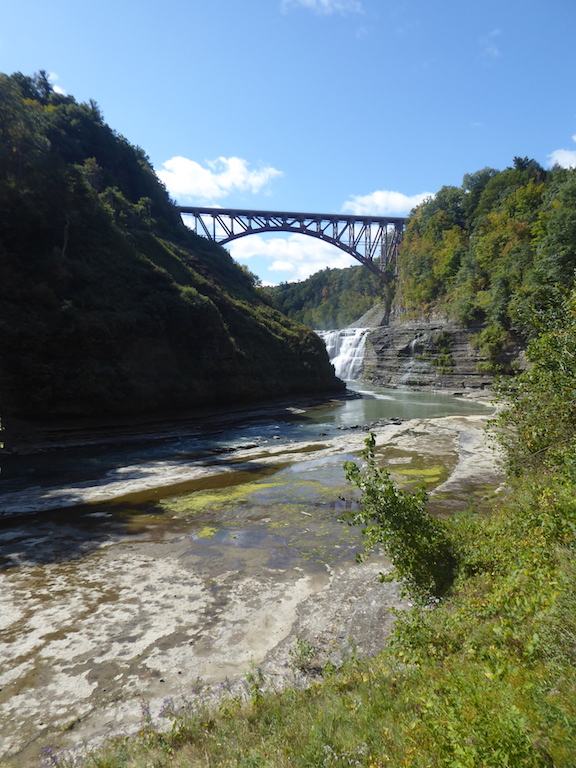 We also flew Steve out here and then I tried to land him on a small rock and crashed him instead. Fortunately, he looks ok and he got some pretty sick photos. 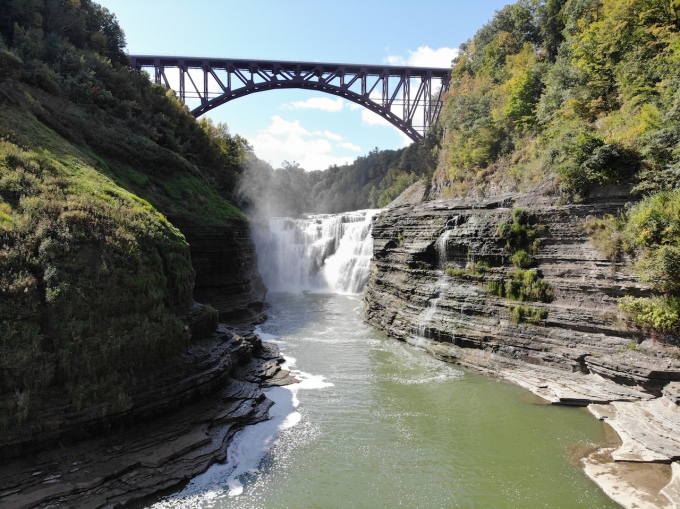 Retracing our steps back to the van I tried to photograph these birds which are circling above us. Not the best photo, and I’m not entirely sure what it is apart from the fact that it’s not an eagle. 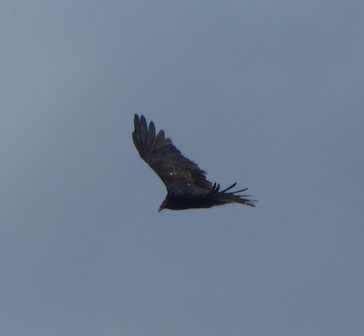 It was definitely the best waterfall we had see so far, but as we had decided to head to Niagara Falls that afternoon, it was going to have a short-lived claim to fame.

Niagara Falls was the most northern place we would be going in America and we wanted to get there soon as we needed to head back down south to Pittsburgh to meet up with Lee’s friends for a gig. By now, we were only a few hours from Niagara Falls so we hit the road again planning to fit in another touristy activity before the day was out.

Naturally, Niagara Falls is very touristy. I’m glad we saved our $10 that morning as it cost us $10 to park there and $20 parking in a day would have been a bit painful. We spent some time chatting to the parking attendant who was very complimentary of our bus, before heading down to the falls itself and to buy some tickets for Maid of the Mist.

The view from the top of the falls. The buildings on the other side of the river are in Canada. 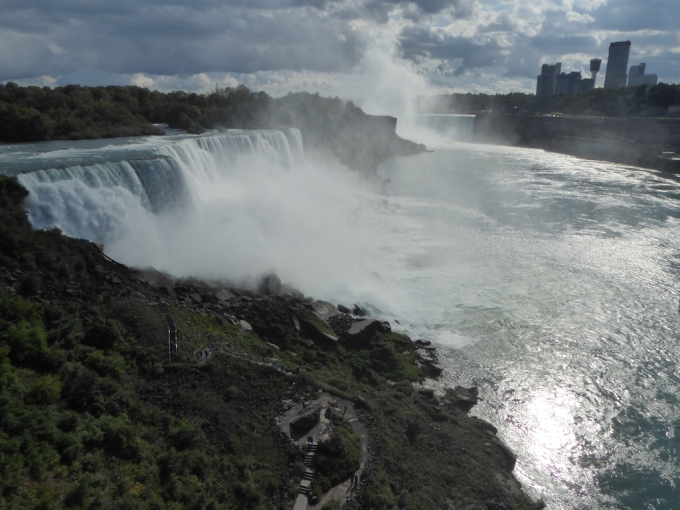 This is the Rainbow bridge that crosses between the US and Canada with the Maid of the Mist in the river below. 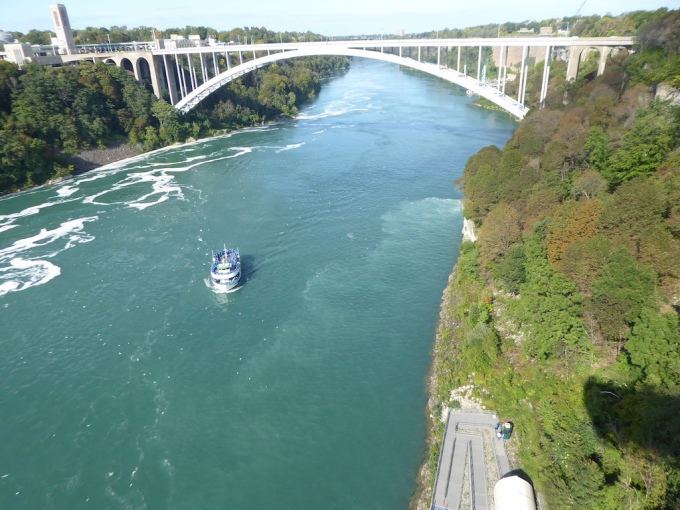 We headed down the boat and put on our free ponchos ready to get wet. The spray throws up some fantastic rainbows, but they are hard to get good photos of as your camera won’t stay dry for long.

The boat then goes down to the Horseshoe Falls on the Canadian side. While I imagined getting soggy, I didn’t anticipate just how much wind the waterfalls produce. This with the spray means it feels pretty stormy at the base of the falls. 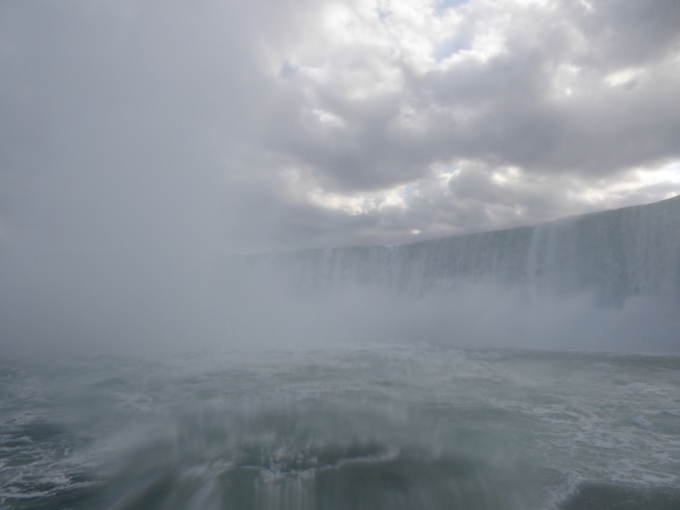 The boat trip is only 20 minutes so we’re soon heading back to shore, passing The Hornblower which is the Canadian sides boat. 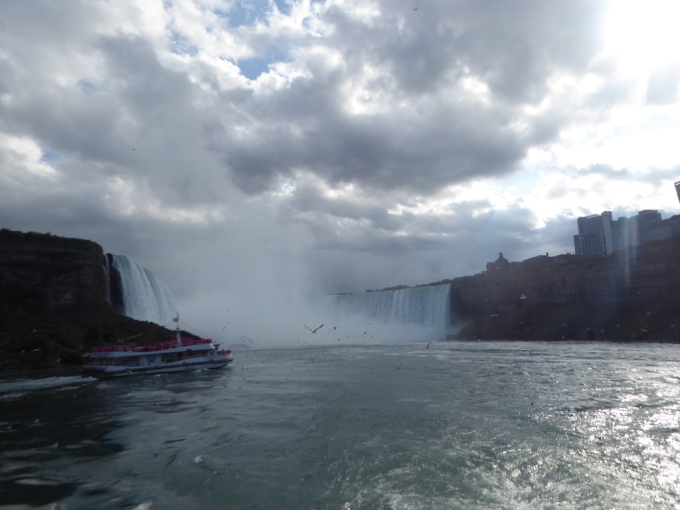 Having been up to the bottom of the falls, we decided to go for a walk around the park at the top and have a look at the view from the top. 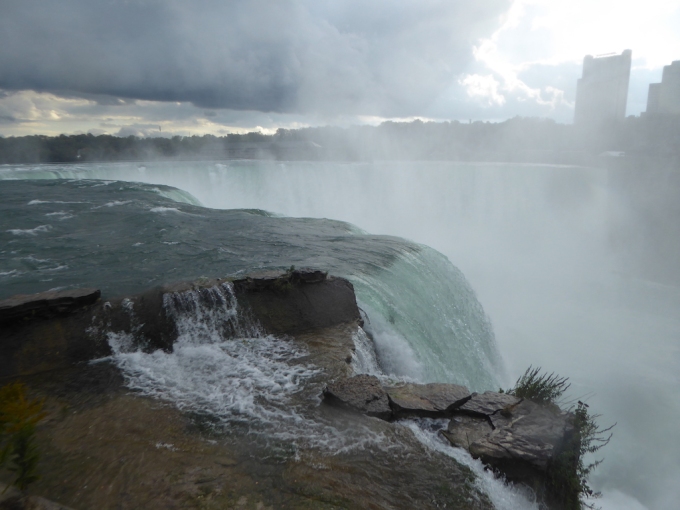 The clouds added to the stormy feeling at the top of the falls and we were pretty wet after a few minutes. 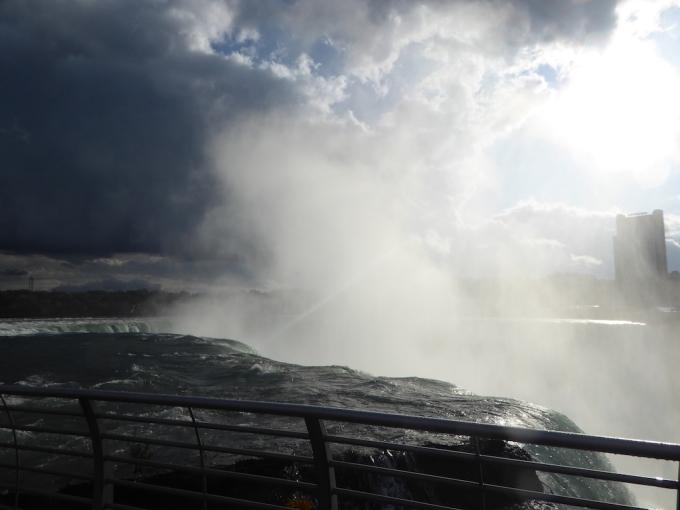 Another rainbow appears as we look back towards the other falls. 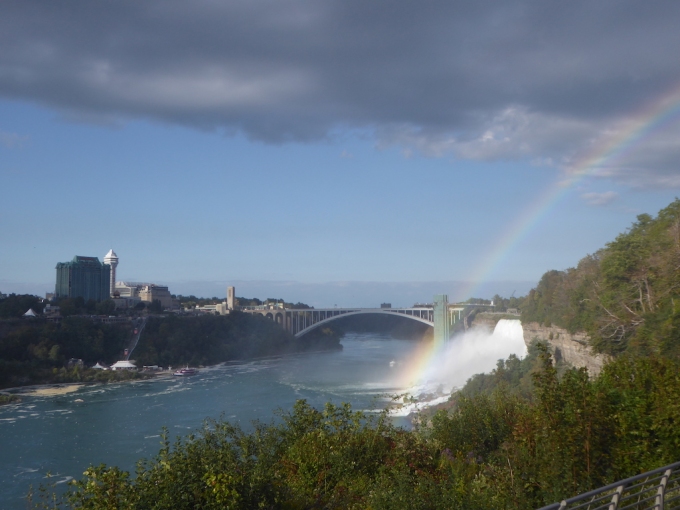 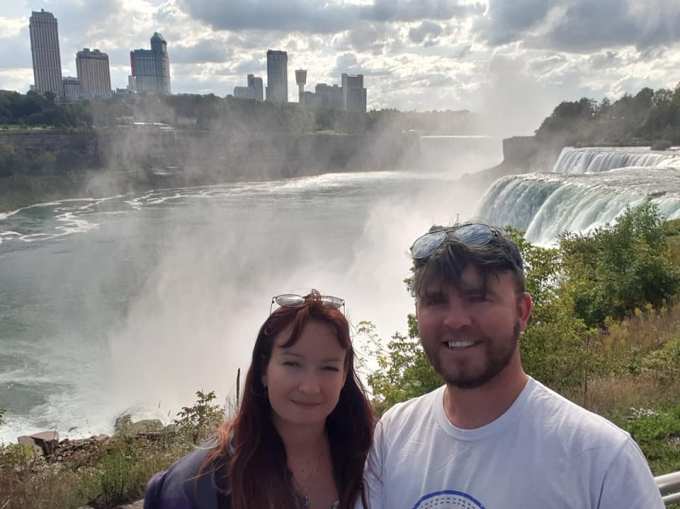 We walked a circuit around Goat Island and also walked out to the Three Sisters Islands out in the middle of the river. You can see the spray at the back of the photo where this massive river plummets over the edge. 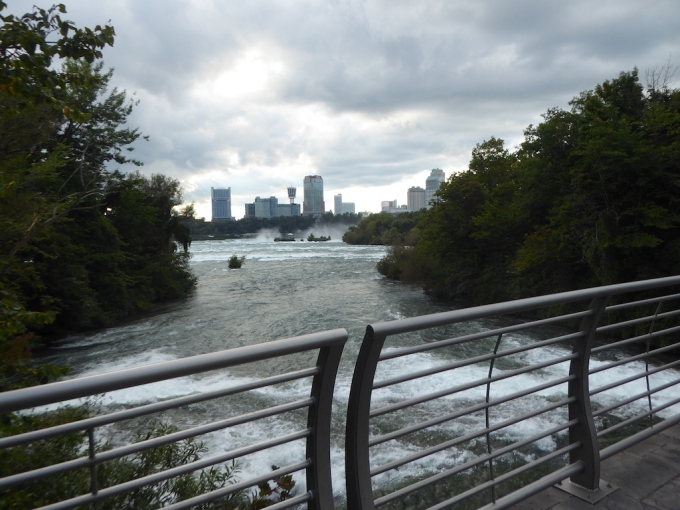 Feeling we had completed the experience we headed back to the van, it was pretty late and after a busy day we weren’t in the mood to find a spot. Initially we pulled over at a trucker stop, but there was only truck spaces and not RV spaces, so not wanting to be arsehole we decided to move on. It’s time for our old faithful – Walmart. 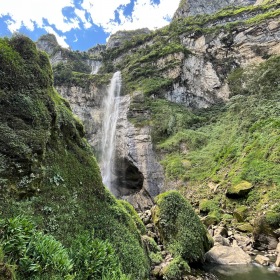 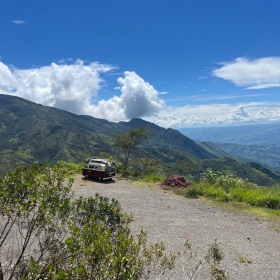 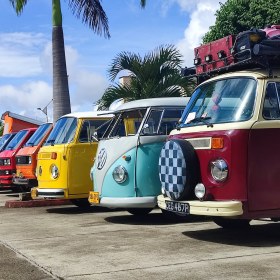 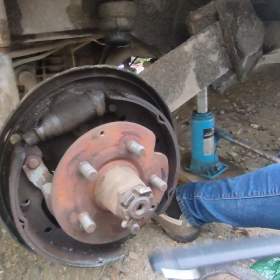 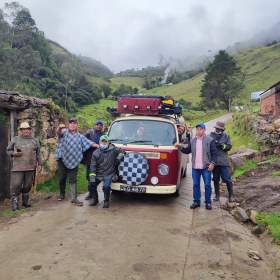 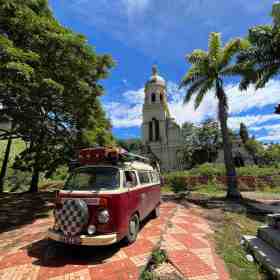 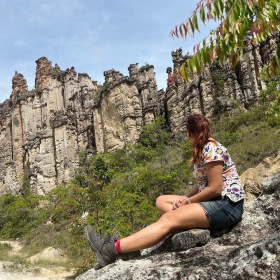